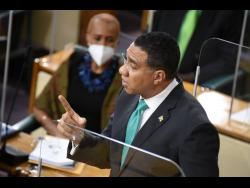 February 28, in my Sunday Gleaner column ‘Actions speak louder than words’, I wrote, “The proposed amendment to the Disaster Risk Management Act (DRMA) to allow more severe penalties… must be implemented urgently. “ Like so many other Jamaicans, I have long lamented inadequate law and ineffective enforcement of COVID-19 rules that have contributed to a further rise in infections, positivity rates and deaths from the virus.

Therefore, I was delighted to see the DRMA amendment removing the requirement to notify the yacht owner or party promoter that he or she was in breach of the parties’ COVID-19 ban before proceeding. the offender. I was also pleased to see the fixed penalties increased to $ 500,000 for specific offenses, well beyond the $ 30,000 that were invariably and ineffectively fines imposed in 2020.

However, my satisfaction was short-lived.

To the extent that the amended DRMA gives the Prime Minister the power, without any parliamentary approval, to determine what constitutes a criminal offense under the law and to decide on the penalties to be attached to such an offense, this is in serious conflict with Jamaica’s democratic parliamentary system and reinforces an unacceptable trend towards a prime ministerial government. The power of Parliament to approve or disapprove executive or prime ministerial decrees that create criminal offenses should not be abandoned in this or any other legislation.

To be clear, the tendency to give the Prime Minister authority over and independently of Parliament, as well as to limit Parliament’s power to hold the Prime Minister accountable, was present and was fought from the very founding of independent Jamaica. The notes of the discussion among members of the 1961 Independence Committee that drafted Jamaica’s independence constitution (which I had the privilege of reviewing) record critical debate.

“It was particularly supported by Manley that in order to give the Prime Minister the absolute power to obtain a dissolution [of Parliament] would allow him to “intimidate” the entire Cabinet, let alone the parliamentary party … Manley’s First Vice-President [Will Isaacs] … Argued that in truth and in fact a prime minister is a dictator for five years…. Opposition member (Legislative Council member Edward Seaga) strongly supported Isaacs point of view: absolutely right and if a minister cannot agree, the minister must resign because only one minister has to rule (Verbatim Record – Proceedings of the Joint Constitutional Committee 1961-1962, cited in Munroe, T. 1972. The policy of constitutional decolonization, page 170 UWI 1972).

The resulting Constitution of Independence which still governs Jamaica embodies rather than resolves this dilemma between parliamentary democracy and the government of the Prime Minister.

On the one hand, Article 69 (2) of our Constitution stipulates that the Cabinet and the Prime Minister “shall be the principal instrument of policy … and shall be collectively accountable … to Parliament”. In other words, Parliament, representing the people, is the boss; Cabinet in a sense is the prime minister’s executive decision-maker and chief executive, but they are accountable to parliament. In addition, our Constitution also states that it is for Parliament, not the Prime Minister, to “make laws for the peace, order and good government of Jamaica” S48 (1).

Thus, while the Cabinet “will be the main instrument of policy” the source of legislative proposals, it is Parliament in a parliamentary democracy like ours which must pass the law. Ultimately, it is Parliament, the representatives of the people who are the boss; is in principle able to fire the chief executive, the prime minister. But what does the Constitution say if the boss, the House of Representatives, decides to fire the CEO? “If … a majority of all members [of the House] ruled that the prime minister’s appointment should be revoked, the governor general must… revoke his appointment “(S71 (2). However,” If the prime minister requests it within three days, the governor general shall dissolve Parliament instead to revoke the appointment ”S 71 (3).

So if our representatives decide to fire the PM, the PM has the power to retaliate by dismissing them! Hence Norman Manley’s opinion that, with this authority, the Prime Minister is authorized to “intimidate the entire Cabinet into saying nothing about the parliamentary party”.

In the 30 years since independence, many of our political leaders (including Edward Seaga, PJ Patterson and Bruce Golding after 1990), civil society organizations, the 1992 Constitutional Commission, parliamentary committees and manifestos PNP / JLP voters made important proposals to curb the prime minister’s government, strengthen parliamentary democracy and increase public participation.

Among these proposals are:

1. Fix the date of our general election and remove the power from the Prime Minister to determine by him when an election should take place within the five-year period.

2. Limit the number of terms the Prime Minister can serve.

4. Strengthen the position in the Standing Orders for Members to ask questions and receive answers as well as for private member’s motions to be debated.

5. Oblige the PM to respond to petitions signed by a representative number of citizens (introduced in September 2017).

6. Establish a mechanism for citizens to directly ask questions of the Prime Minister and interact with him face to face.

These recommendations made over the past 30 years are in line with constraining the Prime Minister’s government, strengthening parliamentary democracy and must now be reactivated as part of a constitutional reform program. Instead, the recent DRMA amendment to give the Prime Minister the power to make orders and create criminal offenses under COVID-19 goes in the opposite direction and must not be allowed to turn into a renewed trend. towards a prime minister’s government. Rapid action and effective enforcement by executive decrees in the event of a pandemic are necessary but must be subject to parliamentary control. If an emergency requires the Prime Minister to take special measures before parliamentary approval, these must be of limited duration until and unless extended by parliamentary approval. . It is unacceptable, even in times of a pandemic, to do the right thing but the wrong thing.