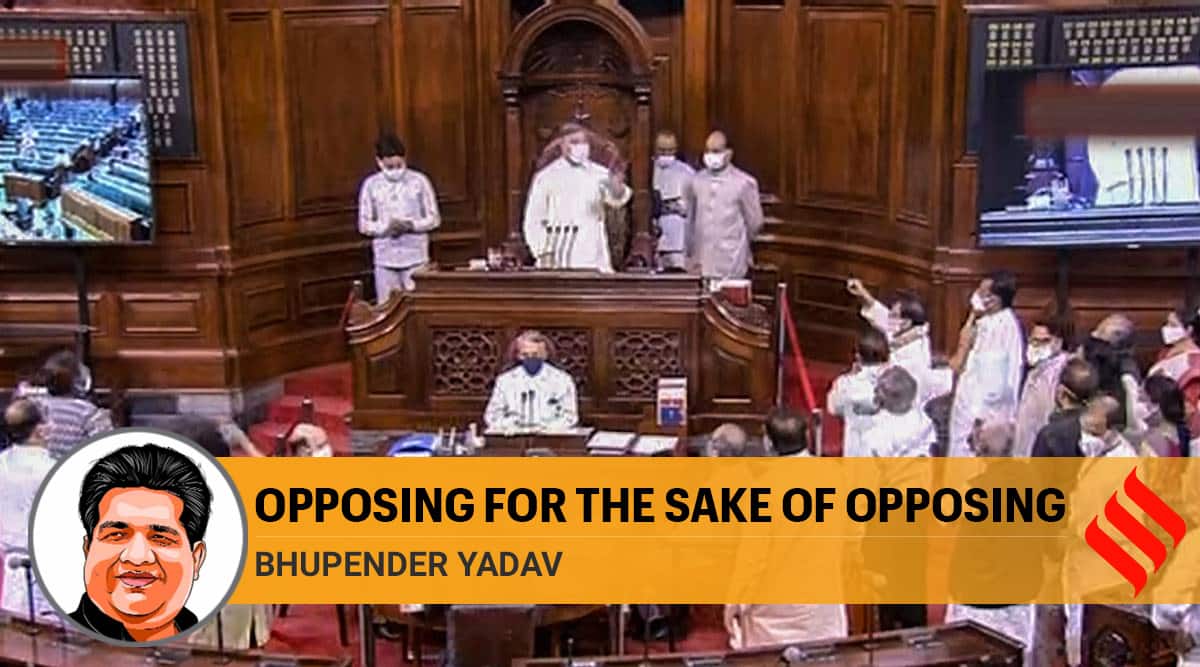 In recent times, some have interpreted the freedom of expression guaranteed by Article 19 of the Constitution not as freedom of speech and expression, but as an authorization to take parliamentary democracy hostage by breaking down the rules – literally. . They found supporters in intellectual circles, who blamed the government – by extension the BJP – and created a smokescreen to cover up what really happened on September 20 in Parliament to deceive farmers and others. citizens of the country.

In his column, ‘Railroading bill‘(IE, September 22) Pratap Bhanu Mehta raises three questions in reference to the adoption of agricultural laws by the Rajya Sabha on September 20. Oddly, he doesn’t mention who came to the House Well, who sabotaged Mike, who heckled him, and who tore up the rulebook.

I want to set the record straight because I was in the House that day. The first question raised by Mehta concerns Question Time. He says he was “unnecessarily” suspended. Question Time has been suspended as the monsoon session has been reduced due to the pandemic. However, the “right to question” was not suspended. Only oral questions were not allowed – members were allowed to submit written questions. The government answered 1,567 unmarked questions in 10 sittings of the House. In addition, 92 Zero Hour submissions and 66 Special Mentions on matters of urgent public importance were made. State assemblies, including in Kerala, Maharashtra, Punjab, Rajasthan and West Bengal, have also suspended Question Time due to the pandemic. Mehta makes no mention of it.

Editorial | Farm bills usher in needed reform, but by bulldozing opposition government is doing reform and parliament a disservice

Mehta’s second point concerns the fact that bills do not go to committee. The opposition often shouts for joy about this. But they continue to oppose and obstruct bills in the House even after the special committee has made recommendations. Even as the amendment to send the bill to the select committee was proposed, Vice President Harivansh was surrounded by hostile members, who snatched papers from him.

Punjab, Maharashtra, Odisha and Tamil Nadu already have contract farming. A committee formed by the government of the UPA in 2010 recommended that the APMC and business licensing monopolies in the agricultural sector not be allowed. Obviously, the opposition opposed the bills for the sake of opposing them.

The third point Mehta refers to is the “division” of the voices. But for a division to be authorized, the House must be in good standing. Mehta oddly missed this point. Was it the BJP lawmakers who disrupted the order? No.

Parliament had a long, peaceful debate that day. The BJP volunteered its own time to welcome others who wanted to speak on the bills – 33 members from all parties spoke. Last to speak was Congressman Ahmed Patel. As soon as he finished speaking, members of his party and other opposition parties rushed into the well and brought the debate to a standstill.

Editorial | There are pandemic demands, but MPs need valuable space in Parliament to ask questions on behalf of those they represent.

The opposition did not have the figures to block these laws. This is what prompted him to execute a pre-planned strategy to block the passage of the bills by all means. The BJP was open to debate and division for two reasons. First, the government had the numbers. Second, that’s what the procedure provides.

Rule 235 of the Rules of Procedure and Business Conduct, Rajya Sabha says that a member, among others, “must remain at his usual seat when addressing the Council.” He also said that “a Member wishing to make an observation on a matter before the Council should speak from its place, rise when speaking and address the Chairman”. Division is not possible when the House is not in order in order to avoid confusion during the vote. This is also why Article 235 (vii) and Article 237 require members to be in their place. Furthermore, Article 259 requires the President to maintain order in the Council and he has all the powers to do so.

Shamelessly, the opposition shot videos of their own hooliganism and released them – again in violation of the rules. Protesters endanger the safety of the president and other members by flouting COVID-19 protocols. They even risked the safety of the marshals by refusing to get off chairs and tables they had climbed on.

Neither the eight MPs identified as offenders, nor their parties, expressed regret, forcing their suspension from the House. The protesters then brought the drama to the lawns of Parliament. When the vice president, in the spirit of a statesman, brought them tea and snacks the next morning, they refused to accept it. Instead, they brazenly justified their behavior.

Some have taken a strange turn and accuse the government of passing the Farm Bill, and subsequent legislation, in the absence of the opposition. Is it the government’s job to bring opposition members to the House? Has he ever denied a debate?

Parliamentary democracy requires responsible government and equally responsible opposition. Will Congress and its intellectual supporters tell the nation how many bills were passed during the UPA / Congress regime?

Congress and its intellectual supporters, in an attempt to justify the unruly behavior of the opposition, tried unsuccessfully to lay the blame on the presidency. In fact, the productivity of the House was 100.47 percent – 25 bills were passed and six bills were introduced. The high productivity normal observed over the past three sessions continued. As a result, the overall productivity of the past four sessions is a commendable 96.13 percent – the best for four consecutive sessions in the past five years. Unlike the 28 percent of the time spent on bills since 1952, 57 percent of the House’s operating time has been spent on bills.

The clean rating given to the opposition by people like Mehta sets a bad precedent for democracy. If the parties and the people behind the heckling aren’t called out, we run the risk of seeing such ugly scenes again.

This article first appeared in the paper edition on September 30, 2020 under the title “Opposing to Oppose”. The writer is national secretary general, member of the BJP and Rajya Sabha